Eagles Of The Empire 18. Traitors Of Rome por Simon Scarrow 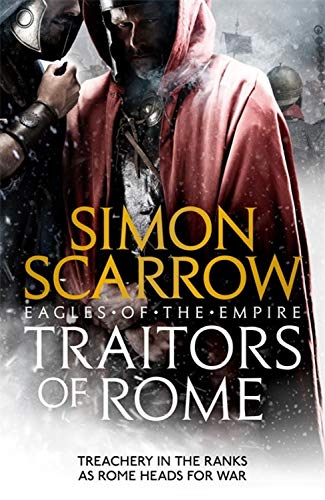 Simon Scarrow con Eagles Of The Empire 18. Traitors Of Rome

Críticas Praise for Simon Scarrow's novels: 'Gripping... ferocious and compelling (Daily Express)A new book in Simon Scarrow's long-running series about the Roman army is always a joy (The Times)A new book in Simon Scarrow's long-running series about the Roman army is always a joy (Independent)I really don't need this kind of competition... It's a great read (Bernard Cornwell) Reseña del editor The enthralling new Cato and Macro adventure in Simon Scarrow's bestselling Eagles of the Empire series. Not to be missed by readers of Conn Iggulden and Bernard Cornwell. AD 56. Battle-hardened veterans of the Roman army Tribune Cato and Centurion Macro are garrisoned at the eastern border, aware that their movements are constantly monitored by spies from dangerous, mysterious Parthia. But the enemy within could be the deadliest threat to the Legion ... and the Empire. There's a traitor in the ranks. Rome shows no mercy to those who betray their comrades, and the Empire. But first the guilty man must be discovered. Cato and Macro are in a race against time to expose the truth, while the powerful enemy over the border waits to exploit any weaknesses in the Legion. The traitor must die ... Praise for Simon Scarrow's bestselling novels: 'Blood, gore, political intrigue...A historical fiction thriller that'll have you reaching for your gladius' Daily Sport'Gripping... ferocious and compelling' Daily Express'Brilliantly told adventures ... Roman soldiering at its very best - even by Scarrow's high standards' Sunday Sport Ver Descripción del producto