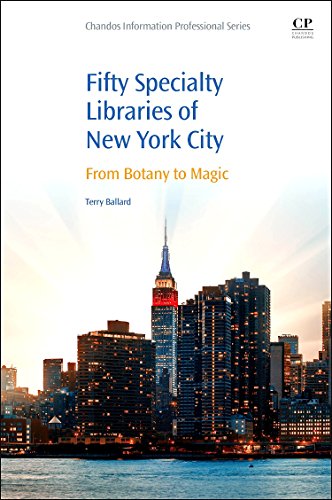 Reseña del editor Everyone knows that New York maintains one of the great library systems in the world - the two lions that guard the 42nd street library among the most important icons in the city. Less well known are a host of specialty libraries that have grown up around the rich intellectual and cultural life of New York City. There are a number of libraries that serve genealogical researchers, but also libraries catering to Spanish, German, French and Russian speakers. There is a library of books about dogs and one that is based on the work of Carl Jung. A library in Staten Island checks out tools to homeowners rebuilding after Hurricane Sandy. Fifty Specialty Libraries of New York City will be a tour of highly specialized but publicly accessible libraries in Manhattan and the Outer Boroughs. In each case, access is described, and an interview with the director or supervisor is presented. This book is a unique information source for all those librarians and researchers interested in the rich cultural heritage of New York's libraries. goes beyond the directory format to give thoughtful commentary and interview material on each libraryrefers the reader to current information written by a librarian with 50 years' experience of public, academic, and special libraries, and with a deep feeling for New Yorkgives an account of 50 speciality libraries of New York City, from small subscription libraries to the UN Library presents information on libraries that are little-known and widely useful in New York Biografía del autor Terry Ballard is the author of two previous books and more than 70 articles in the field of library science, and is the winner of two national writing awards. Since earning his MLS in 1989 from the University of Arizona, he has worked as an academic systems librarian in New York and Connecticut. He is currently adjunct Special Projects Librarian at the College of New Rochelle in Westchester County, New York. He has presented at conferences such as Computers in Libraries, The Third International Conference on the Book in Oxford, and the American Library Association. He is also the author of Google this: Putting Google and other social media sites to work for your library (Chandos, 2012.)